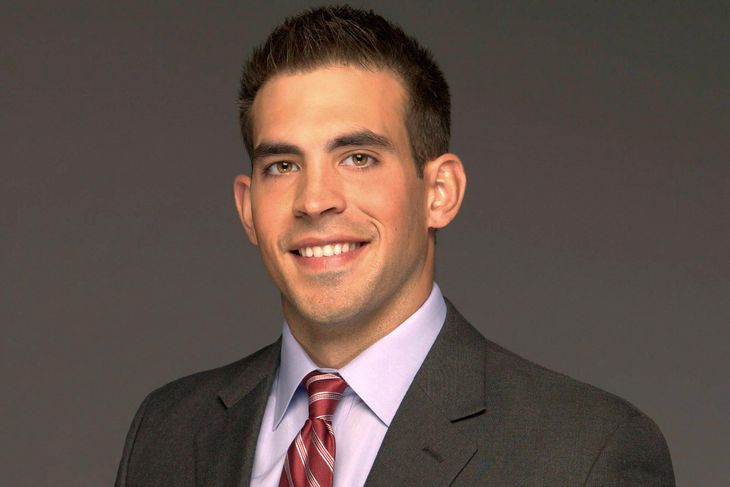 Any time the Dodgers add a new play-by-play announcer to their broadcast team, it’s going to draw attention — especially in the winter before what Vin Scully has said will be his final year behind the mic.

So let’s just make it clear: Joe Davis, who will be the play-by play announcer for 50 Dodger road games in 2016, working with Orel Hershiser, Nomar Garciaparra and Alanna Rizzo, is not taking Scully’s place.

“I think that like all Dodgers fans, I would hope that Vin would go as long as Vin would want to go,” Davis said in a phone interview. “From my perspective, I’m just looking at 2016. I know it sounds cliché to say that, but I’m just looking at my job to do those 50 games in 2016. Nobody replaces Vin Scully — nobody ever will replace Vin Scully. So all I really can worry about is doing my job the best I can, getting to work with an incredible crew and two guys that I think are two of the best analysts in all of baseball.”

With that out of the way, who is Joe Davis?

Davis is a broadcaster for Fox Sports, handling baseball, college football and basketball. (If you were watching Arizona State’s Hail Mary victory over USC at the Coliseum on TV last year, it was Davis making the call.)

Previously, Davis called games in multiple sports for ESPN, and two years ago became the youngest ever to announce a bowl game for that network.

“Joe Davis has put together an outstanding play-by-play resume,” Dodger executive vice president and chief marketing officer Lon Rosen said in today’s announcement.  “We are thrilled to have one of the top young sports broadcast talents in the nation join our great television team.”

Davis is 27, which means the Dodgers have won a World Series in his lifetime — though just barely. A native of Potterville, Michigan (we’ll save the “It’s a Wonderful Life” joke for a rainy day), Davis played football at Beloit College in Wisconsin, throwing for 1,621 yards as a freshman and sophomore before switching to wide receiver after an injury.

But rather than being an athlete who fell into broadcasting after the fact, he was a broadcaster who used athletics to help make a childhood dream come true.

“I grew up around sports,” Davis said. “My dad was a high school football coach. Sports was always on in the house. Probably around junior high, I knew what I wanted to do – pretty specifically, I wanted to be a play-by-play guy.”

When he was choosing where to go to college, he was swayed when the Beloit football coach promised him the chance to broadcast school basketball games during the offseason.

“He knew exactly what I wanted to do,” Davis said. “Another option might have been to go to Syracuse, maybe walking onto the football team and going to a place that was more well-known for its broadcasting. But at a place like that, you’ve got to wait a little longer before you get those (chances). Going to Beloit College, it wasn’t a broadcasting school, but because of that, I didn’t have any competition to get those hands-on opportunities quickly.

Davis said he kept a “laser focus” while in college on his goal, and made it a priority to study the industry. In the summer before his senior year, he became manager of broadcasting for the Schaumburg Flyers of the independent Northern League, serving as play-by-play announcer and media relations director.

Growing up a Cubs fan, Davis said he was influenced by Chicago radio broadcaster Pat Hughes and later TV announcer Len Kasper, as well as Joe Buck on national games. But he also indulged himself with an extended dose of Scully.

“By the time that I was becoming a big sports fan, I guess in the early-to-mid ’90s, he was kind of wrapping up his national (work),” Davis said. “So when I began to get educated on Vin deeply would have been toward the back end of high school and into college, with the MLB radio app. I would sit in my dorm room after a day of classes and football practice, at 7 or 8 o’clock, and flip on the radio app and listen to some of the East Coast games, and (then) at 9 o’clock Central where I was in Wisconsin, most nights it was flipping it on to Vin.

“I think there’s a lot of guys who when they first start out doing it just try to be Vin, the best there ever was and the best that ever will be. … I think if you go back and listen to those first tapes of mine, when I was first starting to do baseball in college, I just sound like I’m trying to be him.”

Soon enough, of course, Davis realized that he wasn’t going to get far trying to imitate a legend, so he gradually evolved into a style he could call his own.

By age 22, he achieved the milestone of becoming the youngest Double-A broadcaster in the country when he got the job behind the mic with the Rays’ affiliate in Montgomery, where he called a no-hitter by Matt Moore in 2011 and won Southern League Broadcaster of the Year honors in 2012. At that time, he also picked up work for the Baylor Independent Sports Properties Network and Comcast Sports Southeast.

“I’ve had so many people go out of their way to help me along the way, so many people be so generous with time and advice when they had no real reason to,” Davis said. “I’ve been incredibly lucky in that regard.”

But while being open to opportunity, Davis also worked to hone his broadcasting principles.

“I think the big thing I try to adhere to stylistically is that it’s not about me,” Davis said. “I think that’s kind of the foundation of my style. With that comes with making sure I’m factually right on everything. Things as small as making sure you pronounce the names right, getting the backgrounds right. If you’re not getting those things right, I think it doesn’t matter what your style is or how well you nail those calls. So foundationally, I try to be as perfect as I can with the factual stuff.

“And in television, it’s the analysts’ medium, so I do my best to tee those guys up. Those are the ones the people sitting at home want to hear from … who played the game at the big-league level and have the insights that people care about.”

Though he can claim to have lived through the Dodgers’ last World Series title, he is looking forward to a much deeper connection with the team.

“I am, it goes without saying, really fired up about it,” Davis said.

“I think the big thing is recognizing how important this franchise’s history is to its identity. I think more than any franchise in sports, the Dodgers are so linked to their history. … You can only read so much though. I think ultimately what it’s going to take is for me to get out there and — I look forward to doing this — sitting down with Vin, sitting down with Tommy Lasorda, sitting down with guys who have been around to see these things first-hand.”

Davis got to know Orel Hershiser a little bit over the summer while making visits to Los Angeles, and has met Monday and Rizzo, but as of Tuesday afternoon, he hadn’t had any contact with his new play-by-play colleagues.

“I got a couple calls (Tuesday) night from an unknown number, and just let ’em go each time,” Davis said. “Each time, a voicemail popped up. I hit play on the voicemail, and just about dropped the phone when it said, ‘Hi, Joe, this is Vin Scully.’

“He left me a long message welcoming me to the family and wishing me the best, and we were able to hook up on the phone a few minutes after that. When it’s the guy who’s the best ever in the profession you’re in, that makes it that much more special. … I’m almost happy that I missed the call so I have that voicemail.”

The other phone call was from Steiner, who likewise offered an extended and enthusiastic welcome.

“That obviously means a ton as well,” Davis said. “Everybody seems to be going out of their way to welcome me here.”